There’s a new version of Zap! on RPGNow.  A lot of work went into this one.  There are some rules clarifications, and significant new optional rules for things like speeding ship-to-ship combat, adding hit locations to regular combat, and pages and pages of new example equipment.  Many of the most useful tables have been added to a new Appendix for easy printing, and there’s a whole bunch of new art, mostly from public domain SF comics of yore.  Plus I’ve included a 5 page Quickstart PDF with just enough rules to generate a character and go.

Also, I’ve been running a lot of G+ Hangout games using Zap!  If you want to join in the fun, follow me or the SFX! RPGs community on G+.  We’re trying to set up an every-Tuesday-night SF RPG hangout, where I’ll be one of the rotating GMs, and I have pick-up games several other nights of the week.  If I can get interest, I’d love to run a longer term campaign instead of pick-up one-shots.  Drop on by! 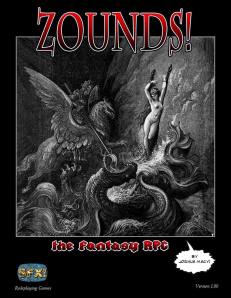 I’m thrilled to announce that Zounds! the Fantasy RPG is now available from RPGNow!  I feel like this is the best SFX! game yet.  It’s certainly the biggest in terms of content.

It’s also the first to have illustrations other than the computer graphics ones that I do… swiped from dead people the world over! (All public domain, that is.)

Like Loading...
Per Jonathan Jacobs, he’s starting to accept nominations for posts to be included in the second Open Game Table anthology of RPG blog posts.

The submission deadline for nominations of blog posts closes January 15th, 2010. I’ve streamlined the submission process so that all you need to is submit a valid URL. Up to 5 per submission form can be accomodated; but there’s no limit to how many you can send in. The nomination form, and more information, can be found here

In light of WotC’s recent “anti-piracy” move to block all sales of legal D&D PDFs (including ones that I bought and paid for and still had downloads, thank you very much) I could write a whole rant about how the pirates aren’t even going to notice it happened, or I could outsource it to somebody who’s already done so and provided an amusing cartoon driving home the point to boot:

The up-side is that at least now people might stop asking “Why bother with a retro clone and the whole OGL thing when you could just buy a PDF of one of the originals from Paizo or DriveThru? WotC obviously has no incentive to ever stop selling them.”

By the “What Pisses You Off Heuristic“, it’s probably an interesting psychological fact about me that I’m far more outraged by the fans that defend WotC’s actions as “just business” than by WotC’s all-too-typical idiocy.

Ok, I understand that Hasbro just killed off the Skirmish game entirely…it wasn’t making money, so take it out behind the barn and shoot it.  But what leaves me absolutely gobsmacked is having just eliminated the entire market for the collectible aspect, why do they still package the damn things as if they’re collectible?  Rare-quality, shmare-quality.  For a role-player rare = inconvenient. Nobody’s going to be impressed that the Beholder they’re facing is a rare.  They’re going to be even less impressed when it’s represented, as usual, by a rubber ball because nobody in their right mind is going to buy 6 packs at $15 each to come up with one.  They just about doubled the price and you still won’t be able to just buy the damned minis you need for the particular adventure you plan to run.

I admit that I’m not their target market*, as I have no plans of running 4e ever, but I read Scott Rouse’s explanation and I have to wonder whether they actually have a target market in mind?  Or do they really think they can just create one by carving the bits they liked out of the failing market (lust for rares and completism…each set is smaller so it’s easier to get them all!) and graft it onto their new customers?  What I’d really like to hear explained is why having considered just making them all visible, as the manufacturers of metal miniatures do, they elected to go with the semi-hidden plus bonus rules making all the old gibes about WotC breaking D&D into a collectible card-game of rules a la Magic finally come true.  Except I’m afraid I know the answer.

* though given how many little toys and things I buy to use as minis in our games, I actually could be…I’ve just never considered getting any D&D figures precisely because of the random aspect.

I mean, I’m glad for the D&D 4e players that they actually have some hope of getting at least the minis that they need to represent the PCs, but coupling the end of an evil policy with a price increase is hardly grounds for the hosannas echoing across the RPG blogosphere.  Of course, as Art Asylum’s Minimates prove, just because you always know what’s in the pack doesn’t mean you won’t end up with a bunch of figures you don’t want just to get the one that you do.  Take it from someone who has more versions of Wolverine than he could possibly want.