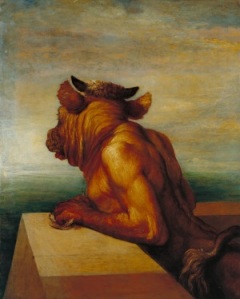 Since +Joshua Burnett and some folks on G+ were talking about statting up Minotaurs as a Large playable race, this is my take for a Template that could be applied to a creature to make a Large version of a creature.  This is based on the Ogre from the Starter Set, since that’s the only example of a Large humanoid we’ve got so far.

Ability Scores: if you want to stick to the Basic pattern of playable races not having any penalties, I’d stick with the ranges of bonuses they have (+2 to +4, no more than +2 in any single ability); if you’re willing to impose penalties, then I’d suggest another up to +3 on STR or CON, with a matching penalty to DEX, for a maximum of +5 increase and a cap of 21.  So a Minotaur might have straight +3 STR (within the “normal” increase range for a non-human, so no penalty, but all applied to the one stat), while an Ogre might be STR +4, CON +2,  DEX -2 (another +2 above the normal, matched by a -2 penalty, and again with more in the one stat than “normal”).

Points to bear in Mind

While most rules and spells in Basic affect creatures up to Large the same way as Small and Medium, so there’s nothing special you have to do, there are a couple rules that are triggered by a creature being Large:

Maximum # of Large enemies that can surround a Medium creature: 5 (page 71)

Large creatures can’t squeeze through a space smaller than would fit a Medium creature, and treat spaces that are Medium size as difficult terrain.  So, e.g. a 5′ wide corridor would be difficult terrain and take 2′ of movement for every 1′ of passage.  This is really the same rule as for other creatures (Medium vs. Small), it’s just liable to come up much more often. (p.71)

Carrying/lifting/dragging capacity is doubled compared to a Medium creature of the same STR. (p. 60)

Armor should have to be custom made (p. 44 suggests armor size as an optional rule, but it probably ought to be mandatory for Large humanoids even if optional for Medium and Small).