Here’s some photos of the old TSR Conan RPG that I just won on eBay. This is actually the first time I’ve bid on something like this, so I’m pretty excited. 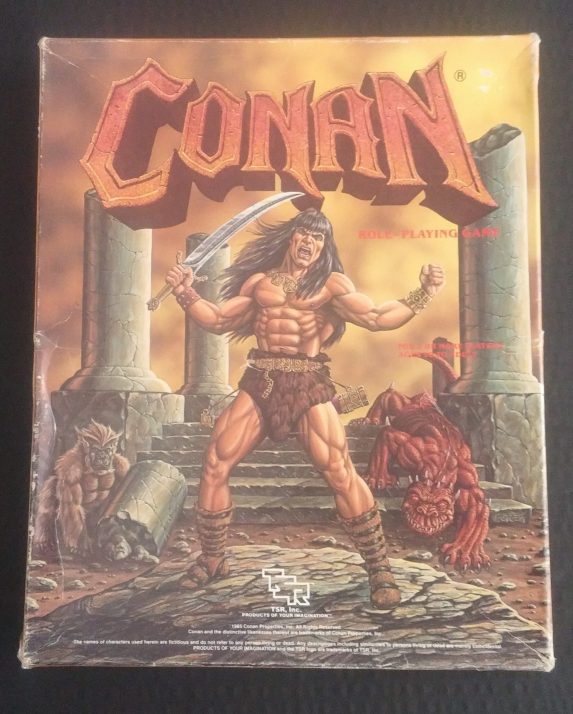 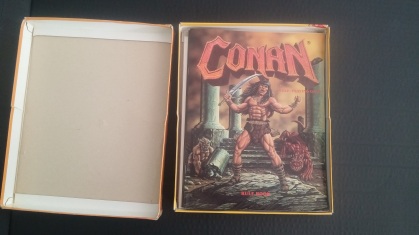 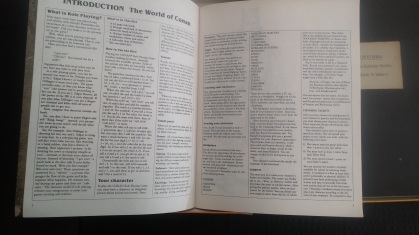 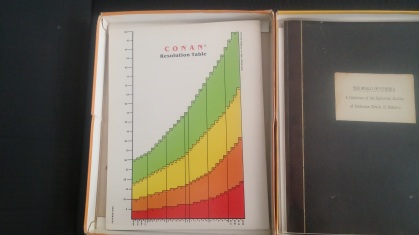 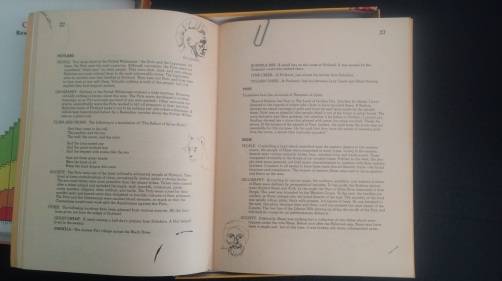 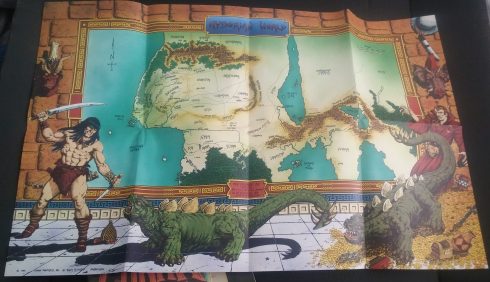 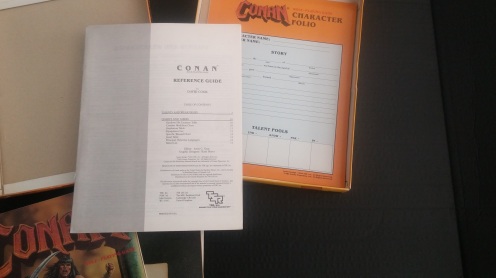 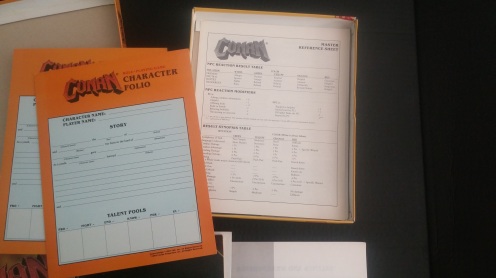 The game is by Dave “Zeb” Cook, and uses a universal chart resolution system based on the TSR Marvel Super Heroes system. You can get a free version of the system, with the Conan IP stripped out, called ZeFRS (Zeb’s Fantasy Roleplaying System). Like MSH (also free), it’s pretty elegant if you don’t mind having to roll  and look-up on that one chart all the time, though unlike MSH Conan uses a roll low percentile system.  Still, it would be pretty easy to reverse that if you wanted to create a new chart.  It seems silly but I know my players are always disappointed when a roll of 99 turns out to be bad.

(32 pages) Pretty much everything you need for an RPG, from back in the day when they could fit it all in 32 pages: Introduction with “what is roleplaying”, Combat, Movement, Dangers and Perils, Magic, Living in Hyboria, Improvement and Ultimate Goals, Refereeing Adventures in Hyboria, Creating Hyborian Adventures, and An Adventure in the World of Hyboria.  The core mechanic is a simple one: decide what Talent is being tested, look up its rating on the resolution chart, and roll to see whether you get a fail (white), or higher degree of success (green, yellow, orange, red).  For opposed actions you first subtract the opponent’s talent score before finding the column on the chart.  Modifiers come from shifting columns left and right rather than changing the die roll.

Character creation is by point-buy1. Interestingly, you don’t really have attributes in Conan. Instead you have a number of talents grouped into six pools: Prowess, Fighting, Endurance, Knowledge, Perception and Insight .  Your rating in the overall pool is the sum of your talents in that pool, divided by 10 and rounded down.  You can use the pool rating both as the default if you have no applicable talent and if it’s better than your specific talent (putting points in a talent will never make you worse than if you used the default).

Just glancing through it, one unusual feature of the system is that whenever combat begins or a new combatant enters the fray, there’s a roll so see if you’re “caught off guard” and get some number of extra actions. This differs from traditional surprise rules because you can be caught off guard even when you’re facing off against your foes with weapons drawn, and even if you’re the one initiating the violence: it’s really a test of reflexes, not awareness, and quite in keeping with the Conan stories. In fact they quote a snippet from one of the stories when introducing the rule.  Bits from the stories are interspersed throughout the text to justify what comes next.

Another interesting bit is that even if you haven’t won extra actions through catching a foe off-guard, you can attempt multiple actions; instead of a standard penalty, though, you roll on the resolution chart to see if you can, and if you fail to get a “Red” result (the highest possible on the chart) not only does the second action not come off, but you have a significant penalty for the rest of the current turn and the next.  Since the chance is quite low, 8% – 15%, I’m not sure whether it would come up in play except as a desperation move.

The World of Hyboria

(32 pages) is a brief compendium of what’s known about the various lands and peoples of Hyboria, oddly presented as if it were the notes of a fictitious professor Ervin Howard Roberts.  I say oddly because the introduction, after talking about Professor Roberts’ notes, goes on with a perfectly clear biography of Robert E(rvin) Howard, Conan’s creator and a bibliography of the then-in-print Ace collections of the Conan stories edited and supplemented by L. Sprague DeCamp and Lin Carter.  I guess the fiction is a wink at the prevalence of “these are a bundle of notes unearthed about the adventures of this fellow in a far off land/time” as a framing device for pulp stories such as Burroughs’ John Carter or  Akers’ Dray Prescot series, but Howard never really went in for that.  His approach was typically more mythical, a long-lost ancient chronicle of a still more ancient time: “Know, o prince, that between the years when the oceans drank Atlantis and the gleaming cities, and the years of the rise of the sons of Aryas…”  and so on.  The World of Hyboria is useful, in that it keeps the referee who wants to run a Hyborean campaign from having to scour the stories taking notes on what’s known about the various lands Conan visits, and often has direct quotes from the stories which helps with the flavor,   What’s lacking, though, is much by way of directly gameable info, although it does have stats for a number of dangerous creatures as well as some examples of famous NPCs like Thoth-Amon and Valeria of the Red Brotherhood.  Still, stitching these together into some kind of adventure is pretty much entirely up to the referee.

(15 pages) lists specific information for each Talent and Weakness you can take, as well as a random hit location chart, a list of combat modifiers, another copy of the resolution chart from the back cover of the rules book, an equipment list, the table for specific wounds (when you roll a Red result on fighting), a list of languages and, unusually, a chart of jewels and their typical values.  I supposed when you’re treading the jeweled thrones of the world beneath your sandals you’re going to want to know the cash values.

(4 pages) contains a summary of pretty much every rule you’d need to consult at the table, some errata for missing talents, and succinct advise for the referee.

BE FAIR! USE COMMON SENSE

BE FLEXIBLE! USE YOUR JUDGEMENT

KEEP IT FUN! GIVE CHARACTERS A CHANCE!

BE ENTERTAINING! USE DRAMATIC DESCRIPTIONS!

Huge and colorful wall map.  Torn between wanting to frame it and maybe wanting to actually use it some time.

Weird useless four-page character brochures: too slick to write on on the outer (character) sides but not slick enough to be erasable, with room for recording a single adventure and its gleanings in terms of fame and treasure on the insides.  The mad-libs part at the top where you fill in your character’s story with the name and occupation of father and mother, where you were born and what you learned as a youth (you have to take at least 1 point in the talent of your father’s occupation) is kind of neat and evocative, but I have trouble picturing these actually getting used except as a template for what you need to write on your sheet of paper.

Two sets, which would be enough for four characters to each have a single adventure if you cut them apart. You could photocopy them, I suppose, but even so you’d only need one master.

Apparently the boxes originally came with two ten-siders and two crayons for coloring them in, though my box only had one crayon left.  No big, since nowadays every gamer I know has ten-siders and to spare.

I’m really happy with this purchase, and somewhat to my surprise I’m actually tempted to try running a game instead of just mine it for ideas for my DCC Sword & Sorcery campaign. I can definitely see some people I play with digging this unified approach and ability to design a character over the more particular everything-is-a-separate-subsystem mechanics and random character generation of D&D and its successors like DCC.