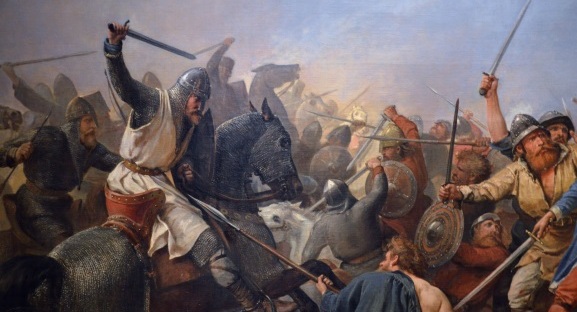 David “noisms” McGrogan has an interesting post on his Monsters and Manuals blog on initiative and some ways you might simulate it in RPGs. After some discussion of what initiative is and some examples from history, he proposes something along these lines:

Initiative
When one side is surprised and the other is not, the side that is not surprised has initiative for the entire encounter.
Otherwise, roll a d6 to determine which side has initiative for the entire encounter.
A side which “has initiative” acts first.
A side which does not have initiative can attempt to “wrest” it from the other. The method for doing so is as follows:
The player (or DM if acting for NPCs) announces his character is attempting to wrest the initiative by either carrying out an attack or – at the DM’s discretion – performing a difficult task. He declares his intended action in the ordinary way at the start of the round. If he succeeds in hitting his target or performing the declared task, he wrests initiative and his side has initiative from the next round onwards. If he fails, in the next round he cannot act at all because of loss of focus.

So, it’s not a bad way to simulate the flow of initiative in battle at all…but I think simulating initiative in battle is like simulating solving a puzzle.  Yes, you could absolutely give them a roll against a stat or skill to see if they solve the puzzle, and that would kind of feel like what happens when somebody solves a puzzle… except it takes the fun out of it.

Backtracking a bit to the start of his post describing initiative: “Suddenly, it seems as though one side gains the capacity to act, while the other can only react.”  That’s exactly it: initiative belongs to the side that’s taking actions which the opponent must react to, or suffer the consequences.  So the real way to seize initiative is not to declare “Attempting to seize initiative” but to come up with (or luck into) a course of action that leaves the enemy no real choice but try and stop it.   Attempt to flank them, cut off their retreat, disrupt their supply lines, target their leaders or their sacred banners, stampede their draft animals, free the prisoners, force them to react.

The real job of the DM in this isn’t to decide whether the task is difficult enough to justify changing the initiative, but to play the enemy side as something other than a bunch of automatons going about their programmed tasks.  Actually try to weigh how much trouble it would be for them if the PC’s ploy succeeds and what would they risk to head it off.   Think about the ways they might try to seize the initiative from the PCs along the same lines, modified by how savvy they ought to be at warfare.  Make the players come up with tactics and strategies to seize the initiative and hold on to it. You don’t even need to declare which side “officially” has the initiative: it becomes evident through play which side is acting and which is reacting.  The side that’s going first according to the standard “Initiative” roll might still be stuck reacting if they’re busy preventing a flanking maneuver or stabilizing somebody who got hurt from a previous round.

Standard D&D has a few mechanics to help with this,  primarily morale and the list of things that automatically cause morale checks (first friendly death, leader death, more than half the forces now dead or disabled).  Failing a morale check should definitely cost you the initiative… and don’t forget to check the morale of the PC’s hirelings and retainers.  Actually tracking ammunition and expendables like light sources (or faking it with “exhaustion rolls”) contributes as well: if the archers are running low on arrows or the spell-casters on spells… Gaining surprise or going first certainly gives that side first crack at putting their opponents on their back foot, but such opportunities are easily squandered.  A few bad/good rolls and suddenly a morale-check condition is met or they just get too busy not losing to spare actions that put the enemy in a bind.

Now, I realize that there may be times, particularly to the observer, when it’s not at all clear what exactly is causing the enemy to act as if they were stuck in reaction mode, some of it may be psychological more than practical after all. It might be tempting to go with formalized initiative rules to try to capture that… but I feel that most of the time the best way to simulate psychological factors is with real people’s psychology.  Let the players decide whether they need to react to the latest enemy actions or they can drive forward their own plans; as DM decide the same way, unless you think you’ll have trouble being fair given how much better view of the state of the battle you’d have versus the commanders you’re controlling.  Then maybe you could throw in an informal morale roll or int check or something, but I’d resist the urge to create a hard-and-fast rule.

So that’s my take on initiative: play as if it mattered, but don’t try to formalize it into a set of rules. IOW: Role and not Roll. There’s a lot in gaming that I think works best that way.