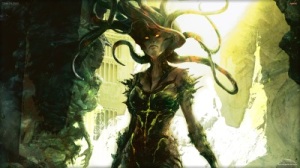 A new race for D&D 5e Dryads are a race of humanoid plants.  Their appearance generally matches that of the vegetation in the region they’re from: a Dryad from a coniferous northern forest might have evergreen needles for hair and bark-like skine, while a dryad from a marshy area might look more like cattails and algae.

Stats: +2 Dex Size: Medium Speed: 30 Age: Dryads mature at approximately the same rate as trees, and can live many centuries.  The oldest may be as old as the world itself. Alignment: Chaotic Good.

Camouflage: Dryads may take a Hide action as a bonus action as long as they are in natural surroundings similar to their homelands.

Tree Merge: Dryads may merge into trees or other substantial vegetation (at least as big as they are) as a half move.  Once merged with a tree they may move their consciousness from tree to tree at their normal pace, re-emerging from another suitable tree; during any turn that they are in transit and not currently occupying a tree they may not take any action except move, not even a free or bonus action, and are not really aware of their surroundings beyond knowing where the vegetation in the area is in relation to themselves; they may not re-emerge as a physical body until they reach a tree at least as big as their body.  If they are occupying a tree, they may take such actions as don’t require appendages or speech, and can perceive normally (facing as if they retained their normal form inside the tree).  If the tree is destroyed with the Dryad in it, the Dryad is forced out but does not suffer damage; the Dryad may choose whether to re-emerge physically or travel spiritually to a different tree.

At One With Nature: need not eat as long as there is sunlight and water available; without water needs both food and water to survive.

Wilder Dryads are humanoid in shape but are clearly plants in all other respects.  Wilder Dryads tend to prefer the deep wilderness, and rarely interact with other races except Wood Elves.

Tough Hide: Natural AC 12, does not stack with metal armors.

Wild Aspect: Wilder Dryads may alter their appearance to make themselves look more like a natural feature, giving them Advantage when hiding in undergrowth. 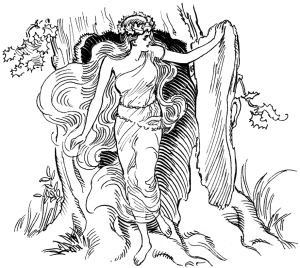 Fairer Dryads are more human in appearance, and more interested in other races and civilization.

Charming: You may cast Charm as a Cantrip.

Fair Aspect: Fairer Dryads may alter their appearance to fully pass as Elf or Human: this just serves to conceal their Dryad features, it does not amount to disguising themselves as somebody else entirely.

Elves: “The Wood Elves are so much fun, and they dance so well.  The High Elves know ever so many of the old songs.”

Humans: “They can be quite vexing, they just don’t seem to be able to see a tree without wanting to chop it down.  But they come up with the most astonishing and delightful variety of things…it’s always something new with them!”

Halflings: “They’re quieter in the woods than human children, but otherwise quite hard to tell apart. You generally only find them in the tamed areas, unless they’re picking mushrooms.”

Dwarves: “What are they?”